Mar is frequently depicted in negative memes because of one reason: no other substantial issues can be raised against him.

So if the worst that naysayers can do to malign his image are malicious photos devoid of substance, then he fares better than all the other presidential candidates who suffer from grave issues.

Carlos Celdran, a supporter of Mar, has his own summary of memes that can be viewed here?:

Typhoon Ruby was one of the stronger typhoons to hit the Philippines in 2014.

Forecasters originally predicted it would make landfall in Borongan, Eastern Samar. The Cabinet Secretaries and national goverment operations were thus centralized in this area. Unfortunately, the typhoon veered and made landfall in Dolores town instead. Dolores is 65 kilometers away from Borongan.

It became imperative for the government to reach Dolores as soon as possible. However, there was no way for cars and trucks to pass through the roads. Trees had fallen and the road to Dolores was filled with debris. In the middle of one roadblock, Mar decided to get off the road and borrow a motorcycle from the nearest resident. There was no helmet available. Despite the road being slippery, Mar trudged on. And though he fell at one point, he got back up and carried on his task. The national government reached Dolores in record time despite the obstacles.

The personal account of Congressman Kit Belmonte, a member of the Congressional Oversight Committee of the Philippine Disaster Risk Reduction and Management (PDRRM) Act of 2010, is illuminating:

Speaking of that motorcycle ride, there were two cabinet secretaries, two congressmen, and two generals making those last 20 hectic kilometers from the stalled convoy to Dolores in the tail of the storm, and approaching twilight in borrowed motorbikes. Among ourselves, we had several combat veterans, several experienced motorcycle riders, and a couple of iron-man finishers. And let me tell you that most of us would have quit to wait for the rest of the convoy if not for Sec Mar leading the way.

There was a whole off-road stretch of at least fifty meters of mud capped by an eerie cemetery that made every one’s knees tremble (from fatigue or fear, I don’t know). Of course, we all fell, slipped, and slid in the sometimes knee-deep mud and fallen trees. But it was only Sec. Mar’s picture that was published, out of context, by someone who waited for him from the relative safety of the road.

But it was all worth it when we saw the gratitude and relief in the eyes of the people of Dolores when we finally broke through. They were no longer isolated, they had not been left alone, and their national government was with them. Together, they were going to get through this crisis and rebuild.

In the end, the United States had nothing but praise for the government efforts post-Ruby. 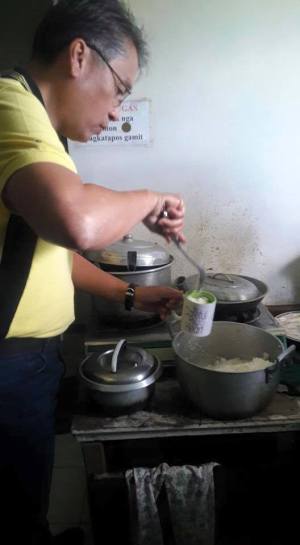 Mar is photographed using a mug for food. Laswa is usually eaten as soup just like dinengdeng. In Iloilo, it’s typically served with rice. Since there was no bowl in the station, Aksyon Radyo Iloilo provided him a mug. Mar simply used what was available and served himself. 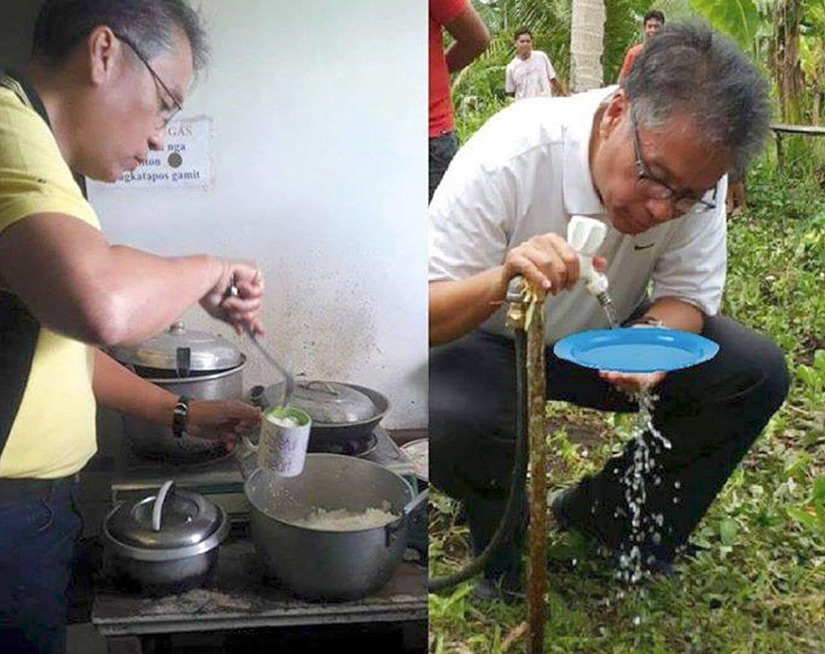 455 municipalities nationwide have been identified by NAPC (National Anti-Poverty Commission) as waterless areas that are having households with access to safe water of less 50% only.

The Sagana at Ligtas na Tubig sa Lahat Program (SALINTUBIG) is one of the government’s main actions in addressing the plight of Filipino households in such areas.

Mar has visited locations where the Salintubig program was implemented. And in one photo he’s seen drinking water from a faucet with his hands. But this photo was maliciously edited to compliment the Boy Tasa meme. Instead of drinking from his hands, a plate is “photoshopped” into the image as if he were drinking from plate. 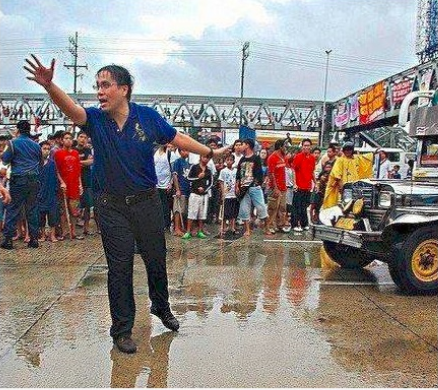 During the 2009 State of the Nation Address by President Gloria Macapal Arroyo, the police officers assigned in the Commonwealth intersection were not doing a good job of making traffic move. In the middle of the rain, Mar decided to do it himself.

28 thoughts on “Stories Behind the Memes”